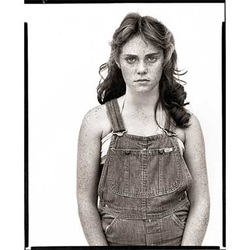 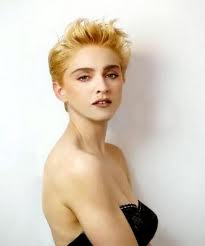 The portrait on the left is by Richard Avedon. On the right is a portrait by Herb Ritts (yes, that's Madonna on the right; no, the girl on the left is not a celebrity). Each portrait was taken against a plain white background.

1. The first thing I notice about the subjects is that they very different, almost opposite of each other in every respect. Avedon's portrait is black and white, starkly intense and imperfect but freckled and gritty, very real. Ritts' portrait is colorful and though beautiful it has a very prepared and posed feel.
2. Facial expression tells you what mood the subject is in and/or what expression they wish to present to the camera. Avedon's subject appears to be looking at the viewer while Ritts' subject has a prepared look with the camera's image in mind.
3. The subjects' attire, expressions, gestures, setting and props tell me that the only things the subjects have in common are that they are female with plain white backgrounds. Avedon's subject, in overalls with an impassive, almost hard expression looks like she might have just been loading hay bales onto a tractor. Ritts' subject appears to have been prepped with the ubiquitous little black dress and a New York or Hollywood fashion, hair and makeup team.
4. If I had to guess, I'd say the subject on the left works on a family farm in a small Western town, and the subject on the right is a singer and actress. In her spare time the girl on the left might ride horses, while the girl on the right might enjoy dining and having drinks at expensive urban restaurants with her large circle of well-heeled friends.
5. I would ask the girl on the left what kind of fertilizer I should buy and what I should plant in my garden this spring. I would ask the girl on the right how she got her start in show business and what advice she would give my 11 year old daughter who wants more than anything to become a famous pop singer.
6. I think the sitter on the left wanted to communicate who she was and how she felt at that moment, perhaps just to be helpful for the photographer. For me, the component that leads me to that conclusion is her eyes mostly, and her expression; it's like she's looking at me, not a camera. The sitter on the right wanted to communicate sophisticated beauty and sex appeal to viewers of her portrait. The details that draw me to that conclusion are her low-cut dress, makeup and hair, along with the Marilyn Monroe beauty mark (which is actually part of the makeup). Incidentally, I am a big fan of Madonna's music.
7. I would like to ask Richard Avedon how he approaches his subjects, what he asks them in order to get such natural poses and expressions - his subjects really do open up to his approach. My question for Herb Ritts would be, what was Madonna's actual mood at that photo shoot - because the photo is obviously communicating something that isn't real. Honestly, I really would like to know. The answer is probably in some song lyrics...

Black And White Portrait With A White Backdrop 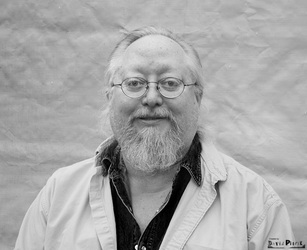 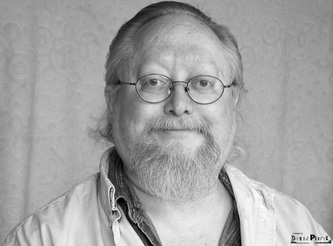 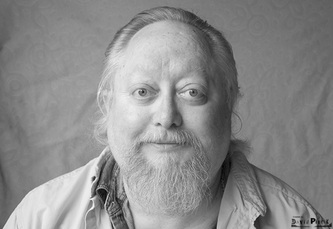 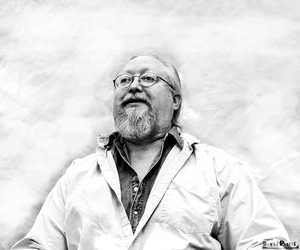 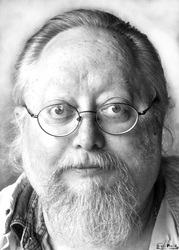 My friend and coworker, Will Adams, graciously sat for me for this assignment. He is an excellent graphic designer, digital photographer and musician. The morning natural light was already very good for this, but we collaborated to enhance it with various reflectors including a silver car reflector that was propped onto a couple of music stands. The five poses are straight on (two different locations) without glasses, from below, and a head shot from above.

I used grayscale image mapping techniques along with Photoshop's dodge tool (which I used for the first time on this assignment) to achieve the lights and darks I was going for. I had light backdrops but in real life I will confess nothing we had on hand was a completely white backdrop (originally). I know from experience that black and white can be very forgiving, but that doesn't mean it's necessarily easier. 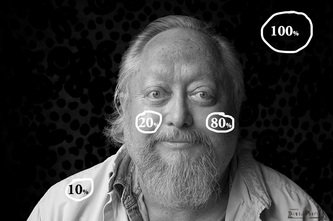 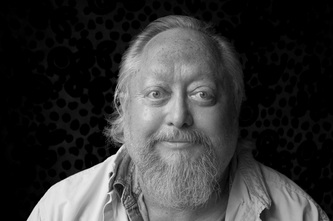 Post-post note: I had adjusted this too far earlier so I went back and reposted it after taking it back a couple of notches... 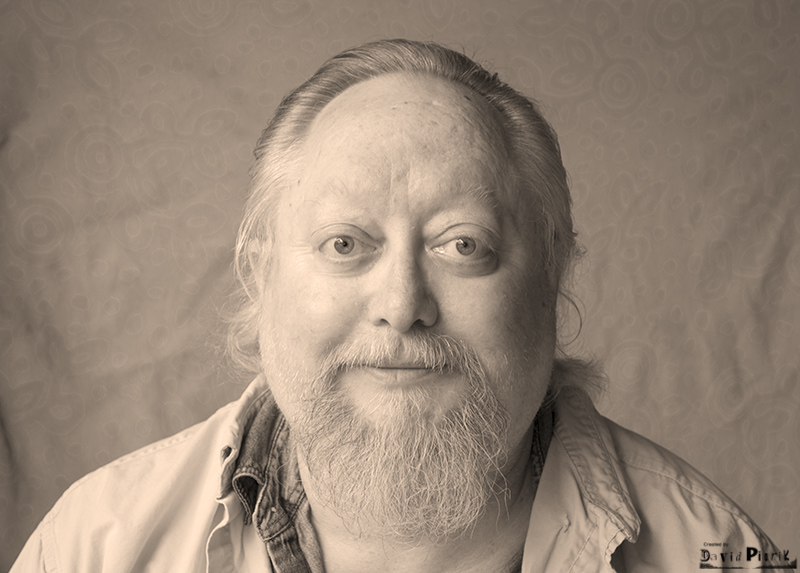 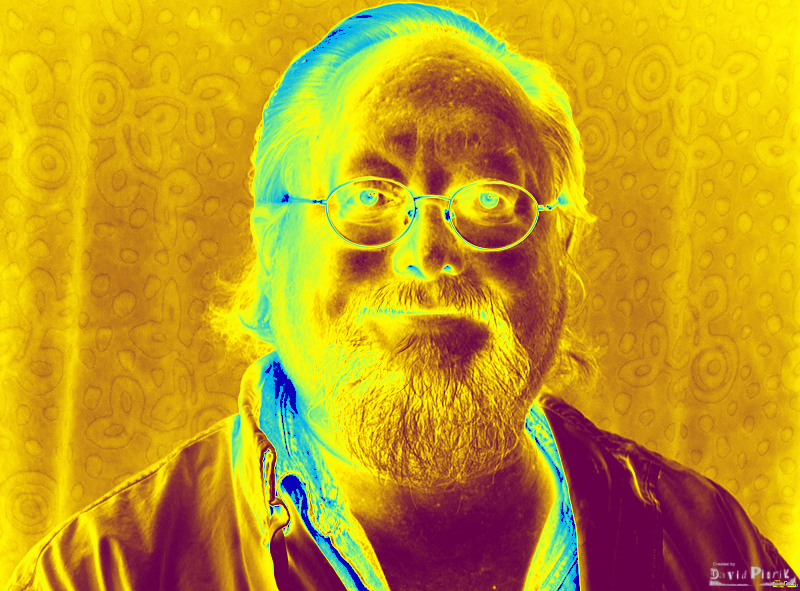 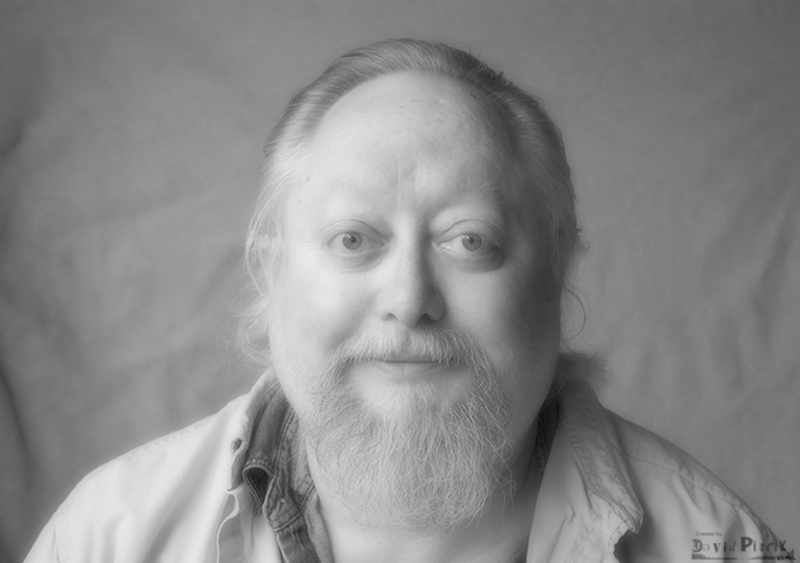 What do my photographs say?

Feelings/mood: I wanted these photos to communicate a relaxed feeling, with a fun and un-rushed mood. It is an honor for any photographer to photograph another photographer. Thank you Will Adams for sitting for me.

Subject placement: For a portrait, the area of the image that is most important to me is the eyes. Of the multiple photos I took, I never once said "cheese," because I was not looking for the ordinary photo your grandma takes when going for smiles.

Multilayered: These portraits convey that youth is a state of mind, not a number; they are young and old at the same time somehow.

Depth of field: The backgrounds are somewhat out of focus on some of these, but they are not the subject. I focused on the eyes.

Light: These photos were taken with natural morning light. No flash was used and not a single artificial light was on. The reflectors that were used simply added to light that was already very good. Two of the five photos also have some natural light that was diffused by trees.

Improvement: I need a white backdrop. Especially after watching the documentary on Richard Avedon. What I'm thinking is that since I drive to a lot of locations to take photos, what I need is a plain white sheet to keep in my car, along with a box of thumbtacks and clothespins. The backdrop that I currently have in my car has patterns on it, that could be distracting. Luckily for these photos there were a couple of different backgrounds, plus they were black and white which helped. I also lucked out on the reflector which was on-site, but I have some white poster board that should work well for that in the future. Also, I need to remember that I'm not going to run out of film! I really could have taken way more images than I did. I took a lot - but there was plenty of room left on the card and plenty of battery life in my Nikon at the end of the morning.

The Week in Pictures - NBC News

If ever you feel like photography is not important, check this out:
http://www.nbcnews.com/id/3842331/
I was moved by most of these. It's the work of pros, plain and simple and certainly worth a look. My favorite one was the sunset salute "Remembering a military disaster" from the 98th anniversary of ANZAC (Australia New Zealand Army Corps) Day by Chris Hyde / Getty Images. It's just really well composed.
http://slideshow.nbcnews.com/slideshow/news/the-week-in-pictures-april-18-25-51661770/