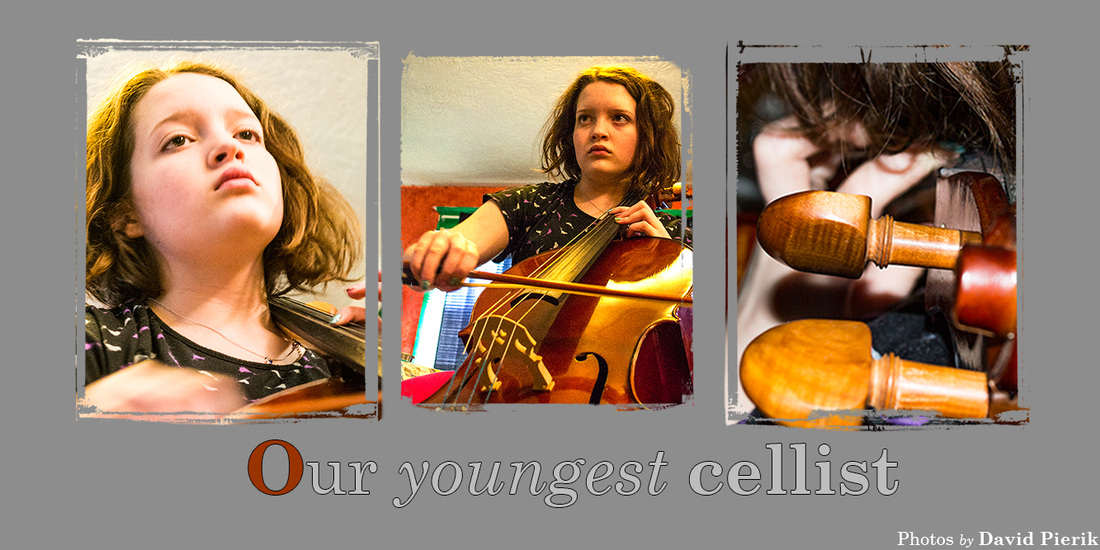 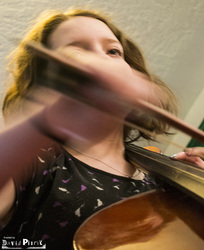 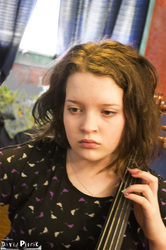 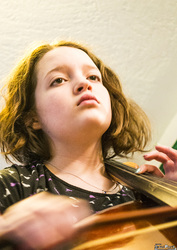 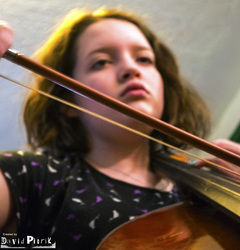 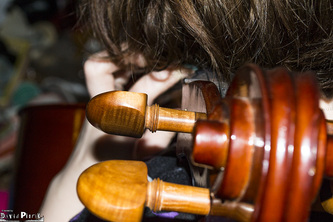 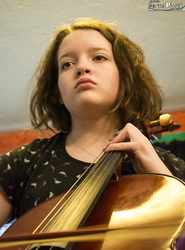 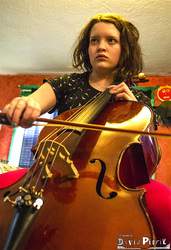 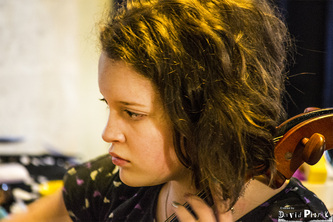 What do my photographs say?
Photo Analysis

Feelings/mood: The concentration, effort and focus that go into practice at home is overlooked by the average music listener or concertgoer. Yet for every hour you see a musician perform, there are many times that many hours spent in practice and preparation.

Subject placement: The cellist's face is not the main subject of each of these photos. The motion of the bow in one, in another it is the bow that is in focus and not the face. In another the scroll and tuners, and yet another the body of the cello itself. The idea here is to include the extra elements to provide context for the overall photographic story.

Multilayered: There is a lot going on beyond these shots. The viewer cannot hear the music but must imagine it. The subject succeeded in maintaining focus on the songs rather than the photographer, or the dog and puppy playing just outside of the shot. As any great musician does, this cellist ignored everything but the music. Although the room is somewhat busy, the angles manage to focus on the subject and minimize the background. Ceilings are thankfully nice and plain.

Depth of field: The fourth photo is focused on the bow, the sixth on the "D" tuning peg, and the eighth on the bridge of the cello so other elements might be somewhat out of focus by comparison. The remaining photos are focused on the face of the subject.

Light: For lighting I used a combination of an overhead light, four floor lamps and supplemented with the flash for some of the shots. I also adjusted exposure and levels in Camera RAW as well as Photoshop.

Improvement: I would ideally have had a spotless white room, as plain as possible to work in, maybe a studio type setting. That being said, I live in the real world and we are a very busy and quite happy family and I don't mind a bit of clutter from time to time; we tidy up for company like I'm sure everybody else does. I used both my regular and long lenses for these shots (shot #9 is telephoto from the adjacent room). I used things I've learned this term in that I shot from every possible angle, above, below, behind, from both sides. At one point I was on my back shooting up from the subject's feet and she managed to not get too distracted even by that, per my instructions. Overall a good shoot. 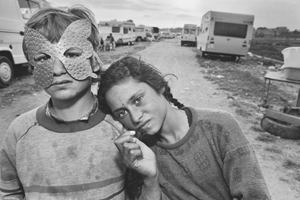 1. The first thing I notice about this portrait is the butterfly mask. The tilt of the girl's head and her hand also point to it, so those components make me say that. But there's way more going on with this photo.
2. The facial expressions tell me that the subjects are not having the best of moments. It's not Hawaii or Disneyland here, no big smiles on these kids.
3. This is more likely to be a photo of poverty than a vacation I think. The subjects' attire is grubby as evident by the stains on the shirt. On the right I can see what appears to be a table atop a tire. Yet the expressions are not so much sad as determined. The gesture of the girl's hand almost signals a call for help in its way. The campers and trailers in the background are packed pretty close together. Also, the photo being black and white adds to the starkness of mood.
4. If this photo was taken ten years ago, the subject in the mask might now be on the professional wrestling circuit, while the girl might be a waitress or a maybe a nurse. Anything is possible. In their spare time these two might get together with their friends and family and go camping at the K.O.A. Pure speculation.
5. GIven the opportunity I would ask the children in this photo if they've had breakfast yet, and if not maybe they would like something to eat and maybe a clean shirt.
6. I think the sitters wanted this portrait to communicate exactly the mood of the moment, which is a bit mysterious. I think the child in the mask might be trying to hide one thing and show another. There is a contrast of fun and sadness in this image that is captivating. The relatively empty space on the right side of the photo makes me wonder where the parent(s) might be.
7. I would ask the photographer, when and where was this taken, and what was the situation? There really is a lot of mystery going on and yet it could just be a couple of foster kids in their grubbies taking a moment during a nice vacation to pose, after wrestling in the dirt. Or they could be homeless beggers, it's easy to speculate but difficult to know.

Other thoughts this week

My favorite of the photos was by Paul Hellstem of the Oklahoman, NewsOk.com. http://slideshow.nbcnews.com/slideshow/news/the-week-in-pictures-may-16-23-51978038/

My heart goes out to those people who were impacted by the tragedy of this powerful tornado. I am thankful that such natural disasters are relatively uncommon.