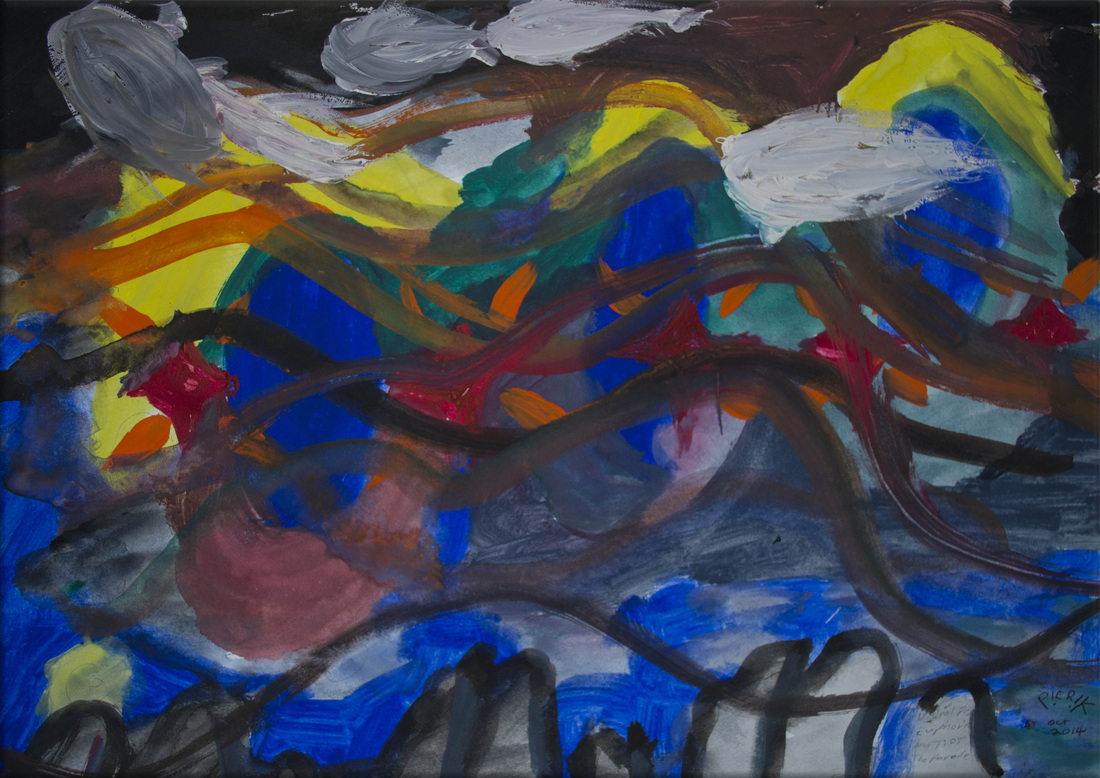 This is what "Euphoria" looks like. Well, the song by Tiesto anyway as I visualized it from what I heard. This is not intended to be a painting representing any object, it is inspired by an attempt to visually depict qualities of the song itself (which has no lyrics). The three ascending blue ovals in the center represent ascending beats, the five red diamonds with orange bursts show a harmony layer and the black shapes at the bottom represent the bass line. On an oscilloscope, some of what we associate with the more beautiful sounds, look like a raindrop turned on its side, and that is what the white shapes on top depict. This watercolor is a slice of time and represents about two seconds of the song.

The Alphabet of Art: Composition 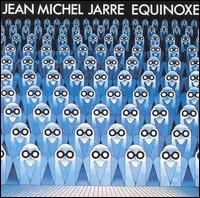 Above: Symmetrical Composition: Equinoxe, by graphic artist Michael Granger for the 1978 album by Jean Michel Jarre, recorded on Disques Dreyfus, who is believed to own the copyright. In this work we have a blue monochrome with perspective, depicting a large audience. Around this time, Jarre had set a Guinness world record for largest outdoor concert, over 1 million attendance. This repeated, balanced work of art follows the same staggered seating arrangement of repeated elements as found in concert halls, has brighter values toward the front, and is not direction sensitive left to right. It is likely based on the period that photoreproduction and/or airbrush techniques were used to generate the precision of detail in this work. Note the white to blue stage texture in the extreme foreground. The album itself was featured in the original Cosmos with Carl Sagan and is an extraordinary textural composition achievement. 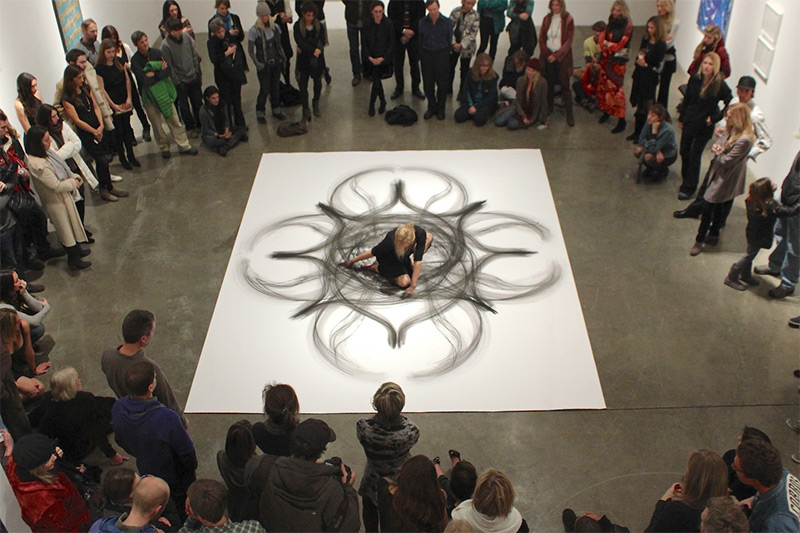 Above: Symmetrical Composition:  Emptied Gestures: Physical Movement Translated into Symmetrical charcoal drawings by Heather Hansen, performance kinetic drawing. Note the precision and large scale of the work here, the cleanness of line. The symmetry is astonishing. The artist herself at the center of the work becomes a part of the work, like the center of a flower, and the only source of color here. Many examples of symmetrical artwork (including this one) are ornamental or decorative in nature, filled with detail. This type of artwork is common in architecture, everyday objects, fabrics, tiles, packaging, scrapbooking paper and so many other places that it is often overlooked. 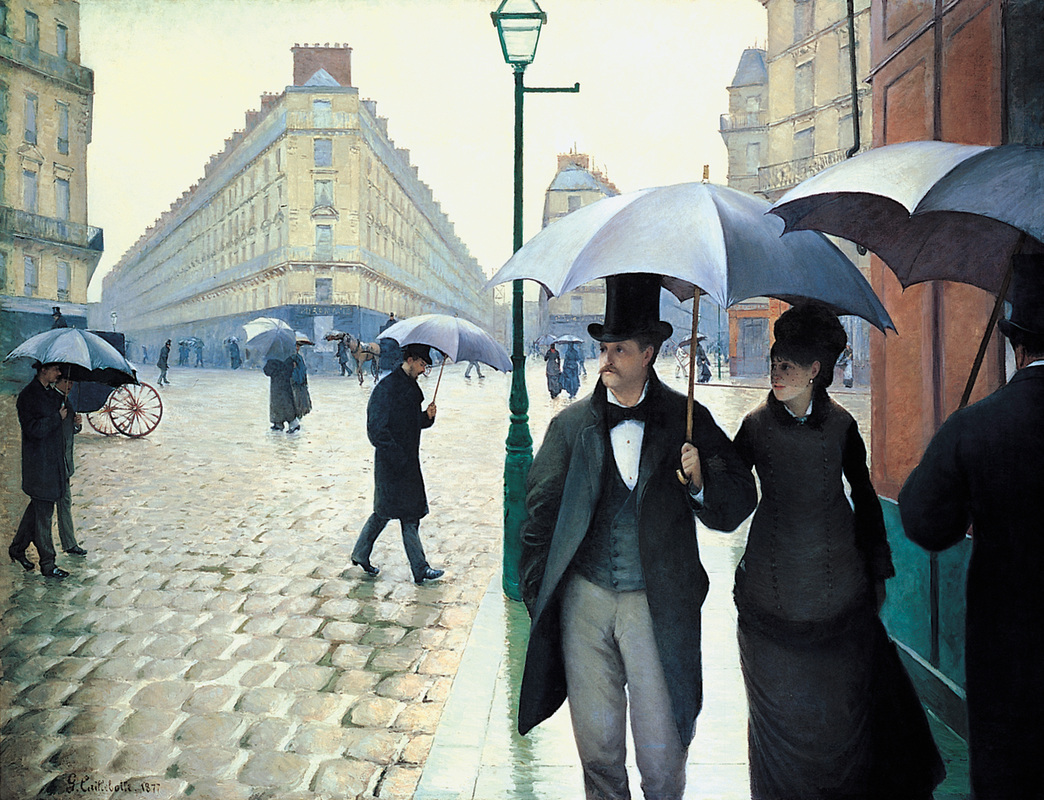 Above: Asymmetrical Composition: "Paris Street, rainy day" 1877 by Gustave Caillebotte. In this impressionist oil painting, we see a strong rule of thirds with the couple at right as the primary subjects, looking to the open light area at left. The eye naturally follows the movement of the people and the detail has a nearly photographic quality. Note especially the reflection of the streetlamp on the sidewalk, and the water between the cobblestones. Even the chosen street and its buildings are asymmetrical and full of direction here and distant figures still have excellent detail. This work has the feeling of a moment and life in Paris strong enough to come right off of the canvas. 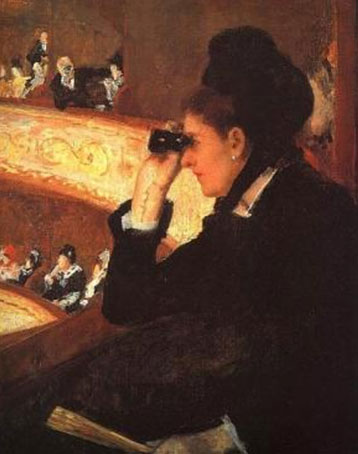 Above: Asymmetrical Composition, "A Woman in Black at the Opera" 1877 by Mary Cassatt. Here the subject dominates the work and we once again have a strong rule of thirds in effect. She his concentrating on the stage, looking through her opera glasses. We have a nice hint of the interior of the opera house itself in the detail of the railing. This is an emotionally active, dynamic work with a strong, deliberate sense of depth of space. Elements are not used in equal amounts here and no element is repeated. Colors are formal and muted, yet warm. This painting tells a story of a moment that is an interesting slice of life. I get the sense that this woman in black probably is someone of means and intellect based on her dress and the setting; in 1877 (more so than now) most operas had dialog in the original Italian, sometimes other languages and opera-goers were expected to translate the action for themselves.