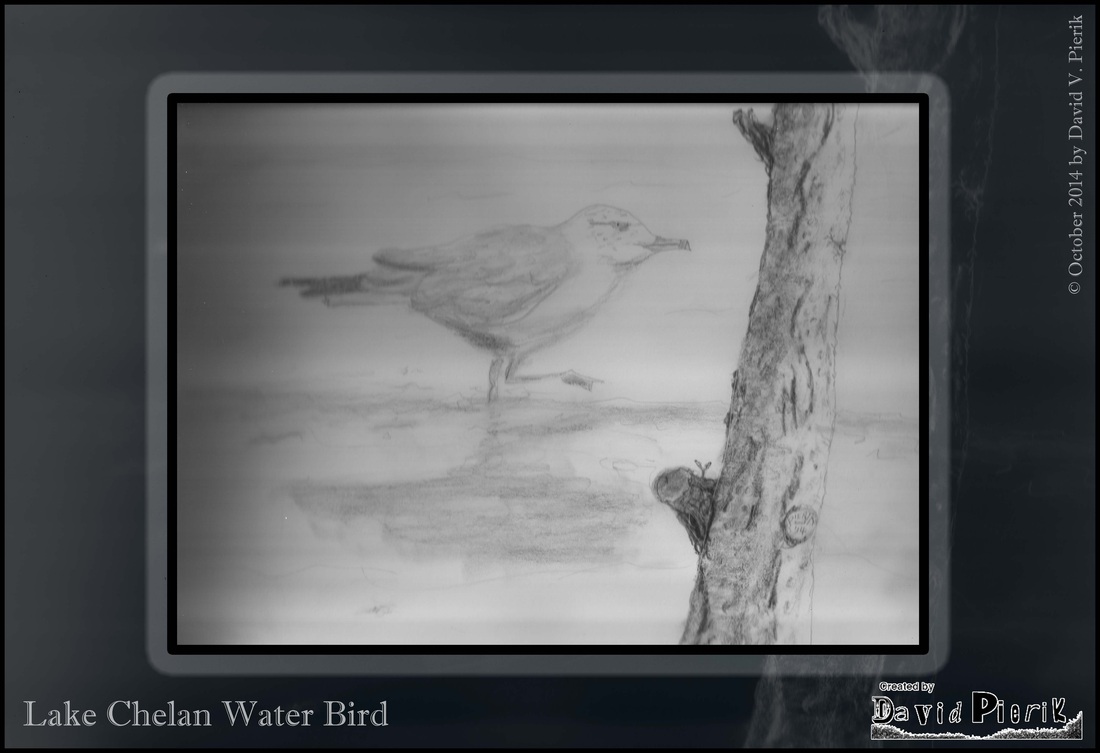 So over the weekend I was on a business trip to Lake Chelan. Yeah, I know life is hard. I took a lot of photos, including several of people and ducks and other things. This water bird was hanging out at the beach and I was able to get in fairly close for a photo. Working from the photo I took, I sketched the above sketch using Derwent Academy Sketching 5H and 6B pencils, a Prismacolor plastic eraser and an 8943B paper smudger on my Canson art book, 11 in x 14 in, 65 lb. stock. After I drew the bird I added his shadow/reflection and then the tree. A tutorial by my instructor, Prof. Marina Shipova, was very helpful. The tree is from memory and imagination really and I don't even know what kind of bird that is. 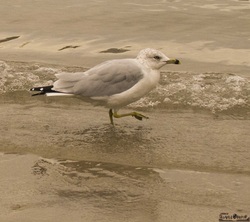 The photo at left was shot with a Nikon D3400 DSLR, RAW and cropped, tight - it's actually a fairly small area of a much larger original photo. At the time I was playing with the manual settings in the course of a newspaper industry photography workshop at the 2014 WNPA convention. This was shot on the morning of Oct. 4th.

There were also a lot of ducks around that day that didn't mind people getting close. But what caught my interest with this bird was the gesture of the foot, for no particular reason.

The Alphabet of Art : The Texture 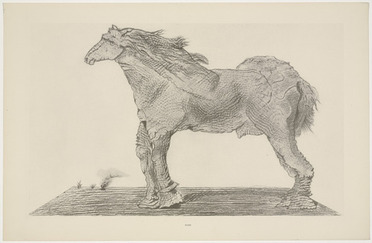 1. Within the history of world art, find examples of artwork making texture both a color and design quality.

At right is an example of Frottage technique by Max Ernst (French), from 1926, titled A Tout oublier (To Forget Everything) from Histoire Naturelle. This technique, using pencil media and rubbings, produces an engraved look.


Below that is a work by Giorgio Morandi (1890-1964, Italian), "Still life with five objects," that is a good example of cross hatching technique. Note the light and shadow but also a suggestion of different colors even though this is a b/w piece of art.

The color example is by Degas, titled, "Before the Mirror." and is a good example of texture combined with color. The use of line, light and color is obviously masterful in this example. What I find myself intrigued by is the importance of light and shadow in revealing and accentuating shape and dimension.


2. Explain the different techniques and styles of each example.

In the first example, the Frottage technique is achieved by drawing with the point of a pencil and good pressure, then putting a piece of paper over the top of that and rubbing with the side of the pencil to achieve an etching effect. Combined images produced using this technique can be assembled into a collage, as in the example by Ernst.

Cross-hatching gives the artist a good technique for achieving control over dark and light areas in a consistent way. The texture produced has a textile-like effect and is consistent in look. Shadows are produced more quickly because of the two directions of stroke used. Note Morandi's strong use of light. The viewer has a clear idea of the direction the light is coming from, by way of the bright white direction-sensitive areas on the two pitchers and the wine bottle. The shadow to the left is helpful, but sometimes it is not the cross hatching that creates lighting effects so much as the use of white space.

What Degas achieves with line and color reminds the viewer of 3-D glasses. The completed effect is strikingly similar in that the viewer has a clear idea of light and shadow as well as depth of field and shape. It is the job of the artist I think to go ahead and exaggerate light and shadow in order to telegraph what is going on in the image because it will be perceived by an audience seeing it for the first time. Textural effects such as linear textures, stippling, etching, cross-hatching and the use of small dots provide the artist with multiple tools with which to meet his or her visual communication goals. 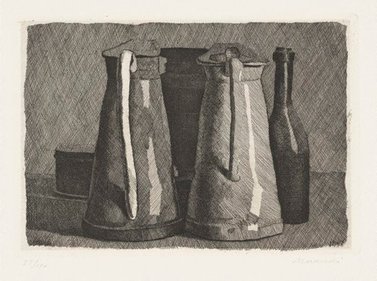 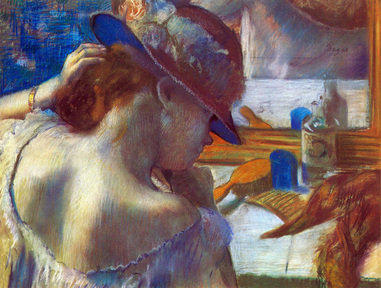