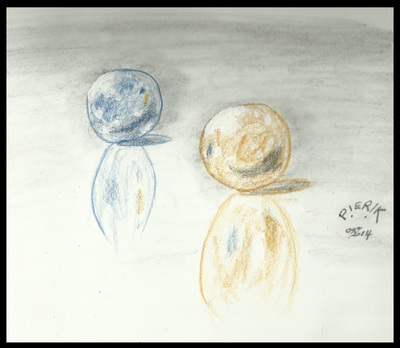 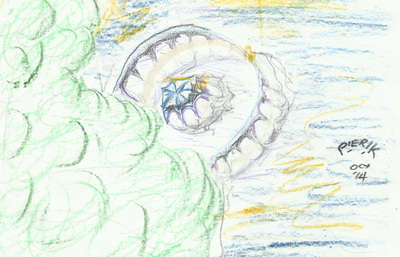 I drew the above marbles after studying real life reflections of round and flat clear and glass beads, and images on the Internet. The drawing on the right was inspired by architecture and the sea, and started out from a coffee ring that did not go all the way around. There are a couple of reference photos further down if you would like to see the "before" image. The tutorial from prof. Marina Shipova helped me a great deal, especially using gauche white for the highlights.

The Alphabet of Art: Value

In "Beauty Preparing to Bathe,"  Konstantin Egorovich Makovsky (1839-1915) demonstrates a mastery of light and shadow. The subject appears to be lit from above, and from the right side with bright but soft light and some reflected light. The light is very flattering and the shadows give dimension without being too deep and harsh. The setting suggests manmade steps descending into a body of water with reflected trees and clouds. By avoiding the temptation to use darker shadows, Makovsky's soft values set an emotionally passive mood. This painting tells a story not only of beauty but perhaps of luxury, innocence and playfulness.

"Night Shadows,"1921 by Edward Hopper (1882-1967) provides maximum contrast for an emotionally active, spatially deep work of art that tells a story of starkness. The light appears to come almost entirely from a streetlamp above and to the left of the subject, casting a long deep shadow. One looks at this work and imagines perhaps a hint of danger, excitement and mystery. In the upper left, around the corner in part of the shadow can be seen a fire hydrant, another hint of this urban setting; not a single plant, not even a weed sprouting from a crack in the sidewalk can be seen. The walker is the sole organic element visible. The hard stripe of shadow from the pole might represent a line to be crossed, a mystery to be solved or an obstacle to be braved. The moment is probably just routine, perhaps sketched from a downtown apartment window. In 1921 streetlights were a big deal in cities, with gas lights as well as electric lights extending the hours of activity in urban centers throughout the world.

In "Fragment de Nymph," Claud Monet (1880s, Impressionist) gives us a point of view from within the shadow of the subject. Unlike typical use of light and shadow, the sun is actually behind the subject in this case, so she is illuminated entirely by reflected light from where we see her. The shadows are both deep and soft, and there is a feeling of life and movement here. This painting has a dreamlike quality. The story it tells is left to the imagination. I as the viewer imagine that since I am below the subject I have been reclining and perhaps she and I just finished a picnic; maybe she is asking me to grab the basket. Note the light and shadow of the umbrella.

In a Different Light 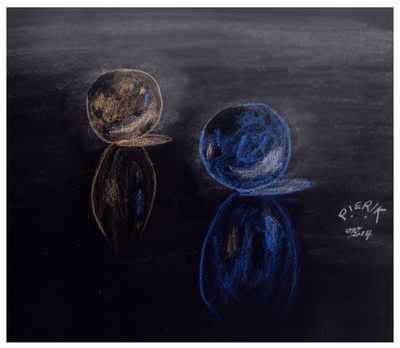 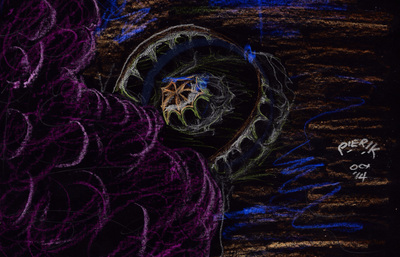 Here is what the above light and shadow creations look like when inverted. Below are before photos with some of the supplies used. 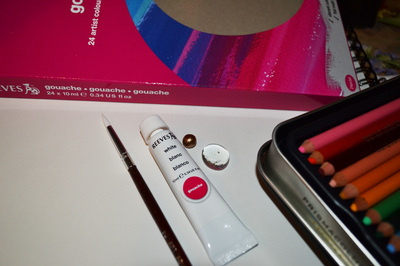 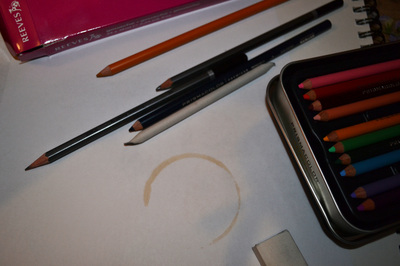